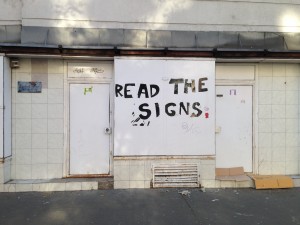 Thanks to the good folk of Griffin Theatre Company, and with the assistance of Arts NSW, in November I went to Budapest to spend a couple of weeks with the independent political theatre company PanoDrama. Global warming was kind, and so whilst it did get down to -3 degrees, this only happened at night. Mostly, the weather was decidedly pleasant. The local political climate, by contrast, was somewhat gloomier.

As the only theatre in Hungary that specialises in verbatim theatre, PanoDrama has a precarious existence, constantly threatened with funding annihilation. Arts funding in Hungary is increasingly hard to come by if you are not a state-run or state-controlled theatre, and the ‘independent scene’ in Hungary has been struggling for decent recognition for many years now. And independent companies that dare to make theatre that might be overtly critical of the actions of government? Well, lets just say that opportunities for support are becoming fewer and harder to come by for such endeavours. And we thought we had politically-motivated funding problems here in Australia!

And yet, somehow, PanoDrama continues to make difficult political work using verbatim techniques – about the racially-motivated murders of Roma, about the politicisation of education, and about abuse scandals covered up by the powerful. So, you know, light and easily digestible stage fodder. It’s fair to say that the company’s survival is mostly due to the passion and stubborn will-power of its founder, the dramaturg and director Anna Lengyel, ably assisted by the wise counsel and strong support of her dramaturgical collaborators Judit Garai and Anna Hars, along with a host of regular actors and supportive venues.

I had previously had long conversations over several bottles of wine with Anna Lengyel in both Sydney and Bergamo, Italy, about the possibility of developing some kind of a cross-national documentary theatre project (see my last blog post for an explanation of why I prefer the term ‘documentary’ to ‘verbatim’ theatre). We clearly had common political and aesthetic interests, and agreed to try and find a way to experiment with how we might work with each other. Budapest in November 2015 was that experiment.

I’ve been working on a series of theatre projects each around ideas of belief and belonging. First has been Quiet Faith, and next up will be the football-themed Smurf in Wanderland. I thought perhaps PanoDrama and I might collaborate on a project about democracy – an official belief system that both of our countries share, though our local variants differ substantially in both history and the way they manifest in the everyday. And so, with the assistance of a group of local actors, we began to experiment with how we might make such a show.

We started with political speeches from leaders, and it was striking the rhetorical similarities between former Australian PM Tony Abbott and Hungarian PM Viktor Orban, especially around issues of border control. We juxtaposed (translated) 2015 speeches from the pair, defending the rights of Christian nations to protect their borders against threats of terror, embodied by the presence of desperate refugees. It’s fair to say that the perspectives of these two (neo-conservative, Christian right) leaders became strikingly indistinguishable very quickly.

Alongside the speeches from politicians we asked a series of questions of ourselves, and of strangers on the street, and incorporated our recorded responses:

There were many false starts, and much misunderstanding in the rehearsal room. The work was by turns deeply serious, utterly perplexing, and ridiculous fun, and over the period of the workshop in Budapest we began to sketch the foundations for a theatre project that I’m starting to call REALLY BIG DEMOCRACY. It’s very early days, but I hope to be able to share it with you in the years to come.