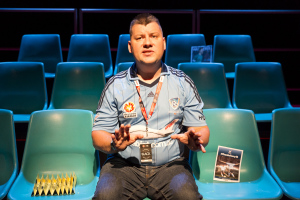 David Williams – acclaimed documentary theatre maker, writer and football fanatic – is the ‘Smurf’. For the uninitiated, ‘Smurf’ is the nickname given to a Sydney Football Club fan.

During the 2013-14 A League football season, Williams, a long-suffering Sydney FC fan, frequented Western Sydney Wanderers’ games on their home turf in Parramatta. Kitted out in his Sydney FC sky-blue jersey, Williams-the-Smurf stuck out like a sore thumb amongst the sea of red and black. His presence caused bewilderment and banter, but none of the hooliganism that’s come to be associated with the game – he didn’t need to fear for his life.

Developed during Williams’ 2015 residency, Smurf in Wanderland is one man’s insightful and hilarious examination of football, tribalism, belonging and identity. It’s also a passionate defence of the fan – what it means to be a fan, the demonisation of fans and the artificial wedge that has been created between Sydney and its western suburbs.

The development of Smurf in Wanderland was supported by the NSW Government through Arts NSW, Griffin Theatre Company through the 2015 Griffin Studio, Brand X as part of the 2014 Performing Arts Residency Program, and the Rex Cramphorn Studio’s Artists-in-Residence Program, in Performance Studies at the University of Sydney.

“Insightful, deeply researched and expertly delivered, David Williams’ Smurf in Wanderland offers 90 minutes of political, demographic and personal perspectives on the round ball game in Australia.”

” If you ever doubted that having an entire season of football described to you could be entertaining, then you are not alone, yet it is compelling. David Williams is a natural storyteller whose great  humour and personal asides inform and entertain, he delivers in a wonderfully understated manner, yet the audience get swept away with the action as described by Williams and begin caring how it will end. The outstanding sound design by James Brown punctuates the story and adds suspense, yet never overwhelms the monologue by Williams. […] The intersection where art and sport meet is about to get very crowded, as Williams’ play sheds more light on human nature, tribal antipathies and cultural mores than it does on football, all within a feel-good story. End result for Smurf? This has all the hallmarks of a great sleeper hit.”

“A performance based around a single A-League football season would seem to have a rather niche audience, but David Williams has such narrative skills and is so thoughtful that the result ranges very widely and is completely involving, even for people, like me, who take only a passing interest in football. […] What Williams has created, and performs so well, is a gentle and often very funny meditation on the culture of football fandom, and on the broader connections between identity and place. […] The structure is still the story of a single season, with all its hopes, disappointments and all-too-brief moments of glory. There are flashbacks and flashforwards, but this structure gives the show its narrative drive. There are slides and some audience involvement. Individual games are called in a way that draws even non-fans in. He also intersperses this with a personal story. Williams, who has made many excellent works of political documentary theatre over the years, has put himself into this one.”

“This is an interesting look at the broader Sydney society and its division, unity, prejudice, acceptance, community, camaraderie, persistence, perseverance and tolerance, SMURF IN WANDERLAND is not just for Football fans but anyone that has lived in a society that its leaders have tried to divide and pit against each other, either in the form of media manipulation or other means.”